How it all began?

The Founding Father, Seppo Ainamo took his Master’s Degree at Helsinki University in the early  sixties, his major subjects were International Politics and International Law as he wanted to  become an Ambassador! However, life took other turns, he made a career in big Finnish export  business, and came to Zimbabwe in 1992, to lead a development cooperation project funded by  Finnish Ministry for Foreign Affairs. After training local and regional people in business  management and export marketing, Seppo stayed on as a trainer consultant.

The story of Dzikwa Trust began in January 1993 as a private initiative when Seppo started  paying school fees for one 8-year-old boy. This boy lived and went to school in Dzivarasekwa 20  km West of the capital city Harare. Soon all the township schools started proposing new cases  for Seppo. By 1996, Seppo supported 18 underprivileged children in Dzivarasekwa.

The Founding Mother, Oili Wuolle, an experienced central banker from Finland, found herself in  Zimbabwe in 1996, working for a regional capacity building institute (MEFMI), with its Secretariat  based in Harare. Seppo and Oili became a team, sharing the same desire to help vulnerable  children in Zimbabwe and to work as volunteers for their benefit.

With encouraging support from friends and relatives, Seppo and Oili increased the number of  children year after year. With time and children numbers growing, they realized that the  activities need a proper structure for governance. In 2002, Dzikwa Trust was established as a  charitable educational trust in Zimbabwe. The “Grand Old Man” of the legal profession, the late  Byron Venturas, handled all the paperwork smoothly and the Notarial Deed of Trust was duly  registered on 19 September 2002, M.A. 957/2002, Protocol no 54.

The Trust was blessed to have the late Stephen J. Chifunyise as its first Chairperson from 2002  until 2019. “Uncle Steve” was also the founder of Chipawo Trust for children’s arts education and knew the Zimbabwe people, culture and society, administration, education, child  development and performing arts sector in and out.

Ever since, Dzikwa Trust has been the implementing partner for successful education and  wellbeing support program in Dzivarasekwa. The current Chairperson of Board of Trustees is a  renowned businesswoman, Marah Hativagone; Vice Chairperson is Stephen Gwasira and  Trustees are Sharon Wallett and Seppo Ainamo.

The Finnish sister organization is born

As Dzikwa Trust support for Dzivarasekwa OVCs developed, it became clear that fundraising in  Finland needed a formal governance structure. In April 2003, a charitable civic society  organization, Zimbabwe AIDS Orphans Society was established to increase visibility, credibility,  and to secure ability to apply public grants. Today, the Finnish society’s name is Children of  Zimbabwe Society, and it is one of the best-known small NGOs in Finland.

The Finnish Society has been the main fundraising arm for Dzikwa Trust Education & Wellbeing  Support program until today. Children of Zimbabwe Society has members, dedicated child  Sponsors and general donors mainly in Finland, but also in Germany, Scotland, England, Sweden, and a few in Canada and USA. The Society has received several Finnish development cooperation  grants through the Finnish Ministry for Foreign Affairs over the years. The latest grant is for 2023-

2026 and it is meant for empowering youth, especially girls, through life & employability skills and  entrepreneurship training. Children of Zimbabwe Society have got good recognition in Finland.

In the first stage, Oili joined Seppo’s program towards the end of 1996 with her networks. In one  year, the number of children increased from 18 it to 36. There was a growing need for education  support to orphaned children in Dzivarasekwa. However, Oili’s plan at the time was to limit the  total number to 60 children.

The second stage started when the former Governor of the Bank of Finland, Dr. Sirkka  Hämäläinen visited Zimbabwe in November 1997. She started supporting two orphaned  children. After the Governor returned to Finland and the staff of the Bank of Finland heard about  her direct development assistance, about 40 staff members wanted also to have a dedicated child to sponsor. In 2002, the number of children exceeded 100, and the growth was led by a good  supply of new sponsors. Still, there  were no formal structures or premises. Oili and Seppo ran the operations from home and from their double-cab vehicle – known to children also as “Seppo”.

The third stage was to institutionalize the support operations and the governance with the charitable organizations both in Zimbabwe and Finland. This stage also brought out Seppo’s great idea to build a center for the orphans in the  middle of Divarasekwa. Zimbabwe was going through tough times, economy spiraling down and  inflation rocketing up. Obviously, Oili being a conservative central banker said: “NO way”. Raising  enough funds and building in the hyperinflation economy seemed a daunting prospect. But soon a  common tune was found!

Dzikwa Trust Fund’s first strategic action was to buy a stand from the City of Harare. The City  Council would not have sold the land to Finnish individuals. At the end of 2005, Dzikwa Trust  bought ½ acre-piece of land from Harare City Council. Around the same time, Seppo visited  Scotland, and the Scottish Royal Arch Freemasons graciously granted £ 8,500 for the purpose of  paying for the land and for making the architectural drawings.

In January 2006, an Executive Vice-President of Nokia invited Oili and Seppo for lunch. He strongly  advised against building a center for 125 children only. As result, and based on the grave need in  Dzivarasekwa, the number of children was increased to 400, and for a short while in 2008, even to  560 orphaned children. The Finnish society got busy applying major grants for the purpose of  building the center. The society finally qualified for Finnish Government NGO support and was  awarded a special grant to build the Kitchen/ Dining hall at the Center.

The Corner Stone was festively laid in November 2007 in the presence of the Scottish Grand  Master, Charles Ian Robert Wolrige Gordon of Esslemont and the then Minister of Health & Child  Welfare Hon. Dr. David Parirenyatwa.

The fourth stage, 2007-2012 was a period of building this Activity Centre for the orphaned  children. Dzikwa Trust was able to secure corporate social responsibility support from Old Mutual  who gave us a senior building expert to be the Project Manager. An important factor in success  was a reliable construction company, earlier called Durawall Precast, now Eco Homes /Daytona.

In May 2010, Dzikwa Trust celebrated the opening of the ball court in the presence of Dr. David  Parirenyatwa, Harare Mayor Muchadeyi Masunda, the Swedish Ambassador, Oliver “Tuku” Mtukudzi, partners and community members. In November 2010, Dzikwa Trust opened the  Kitchen Block in the presence of Hon. Lazarus Dokora. In 2011, we opened the ICT Block in the  presence of the Old Mutual CEO Mr. Jonas Mushosho and the Finnish Ambassador Mrs. Sinikka  Antila. In 2012, children’s Ablution Block was opened in the presence of the Hon. David Coltart and  the Country Representatives of UNICEF and Catholic Relief Services. Finally in 2013, Dzikwa staff  got its office building, funded by Scottish and English Freemasons, in the presence of the Chairman  of Zimbabwe Aids Orphans Society. The office premises have later been extended. The last developments have been the Coding Skills Container building together with UNCOMMON.org and  a separate Community Outreach and Skills Training building, funded by Government of Japan and  opened in November 2021.

Today, Dzikwa Activity Centre at # 3147 Rujeko Street, DZ 1, is a multi-functional hub of activities  and a beacon of hope in Dzivarasekwa. 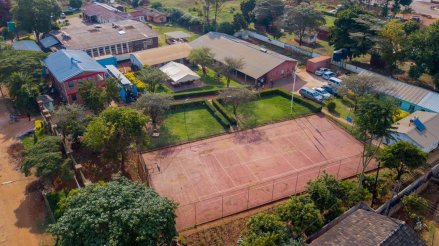 During the fifth stage, Dzikwa Trust has streamlined its procedures and processes to correspond  with modern and efficient practices in NGO governance. All our senior staff members have been  with us at least seven years.

We have entered the sixth stage with new challenges and initiatives, to ensure the sustainability  of Dzikwa Trust program and its fundraising. Fundraising in Zimbabwe has so far mainly come in  grants through Embassies, in the form of donations by business partners and by UNICEF  Zimbabwe. It has covered Dzikwa Centre enhancements, new investments, e-learning tools, food  supplies for Dzikwa Kitchen, as well as special projects for food security. Local fundraising for  activities through the PVO society, Friends of Dzikwa Society (FODS), needs to be strengthened.  FODS is responsible for the Annual Sports Day for children and organizes a Charity Golf  Tournament for fundraising.

Part of the sustainability is that the Finnish Society has been recognized as a charity both in  Germany, in UK and has recently established a charity organization in the USA. These structures allow individual donors in respective countries to get tax relief from their charity donations.